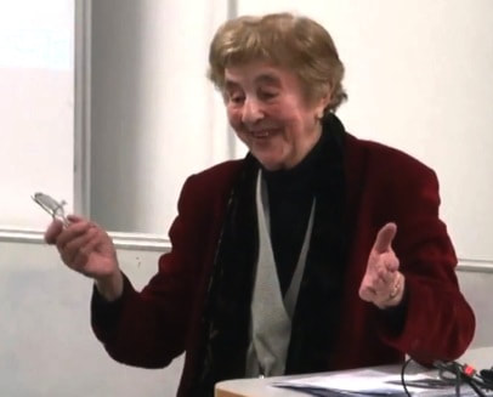 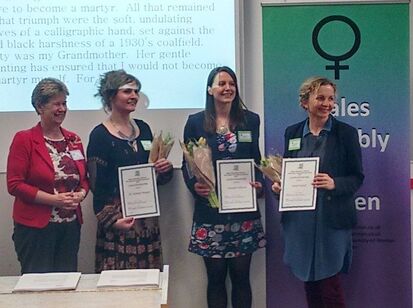 Held in memory of Audrey Jones, a founder member of Wales Assembly of Women, who campaigned tirelessly for women's rights both nationally and internationally, the awards highlight research that help to shape policy and provide a focus for campaigning and lobbying in Wales.

All universities in Wales are circulated with the details of the award scheme and award recipients present their findings at the annual conference of Wales Assembly of Women.

It was always the wish of Audrey Jones to involve more young women in WAW - sixth formers, undergraduates and postgraduates. Audrey was always keen to hear about the latest research evidence. To this end WAW wished to honour her memory by setting up a specific annual opportunity for this at the annual WAW conference. The underpinning concept is to help young women, and mature women students, of course, to disseminate their research findings and to have a platform for sharing important ideas which may shape and inform lobbying and campaigning decisions. Audrey was aware that far too many research findings remain in dissertations and theses where only a privileged few had access to them!
​
Thus WAW, courtesy of financial arrangements and the generosity of Audrey's son Robert Jones introduced for the first time in 2016, the Audrey Jones memorial awards.  Following the success of the first five competition cycles, the award will continue for 2021.

Download the outline details of the eligibility criteria for 2021 awards; that is, who is eligible to apply, the milestones for submissions and announcements of results and the conference date.  The final 3 pages comprise the application form [with expanding sections].

Please share and circulate to women post graduates who may be undertaking dissertations at masters level, doctoral level and to any involved in post-doctoral research on women and girls.
The awards are co-ordinated by Dr Jane Salisbury.

Audrey was an inspiring woman with boundless energy. She was one of the founder members of the wales assembly of women in 1984 and a past chair and secretary until 2014. On retiring from her deputy headteacher post at St Cyres comprehensive school in Penarth, Audrey worked tirelessly for the cause of women's rights, safety and equality in pay and opportunities. She campaigned both nationally and internationally, being responsible for the representation of wales on the economic and social council of the united nations.

Wales assembly of women organise an annual conference normally in the spring of each year.
Though the pandemic situation postponed the 2020 conference to autumn and a zoom event! Typically the topics for the conference address key themes of equality and inclusion, identifying discrimination, tackling disadvantage, etc.  Previous conference titles have included: 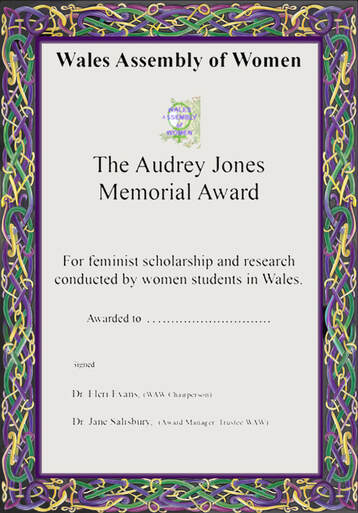 Welsh Government Minister for Equalities Jane Hutt MS said it was great to have been involved with the Audrey Jones Memorial Awards for Research by Women, co-ordinated by Wales Assembly of Women, an independent campaigning NGO, since their introduction in 2016.
She said:

‘I say this every year, but Audrey fought tirelessly for women’s rights and equality. She would be so heartened by the work of the latest Award recipients and the platform that Wales Assembly of Women has provided to give these awards in her memory.

‘The different perspectives we hear through the presentation of the awardees, demonstrate that gender inequality remains a stubborn and persistent issue around the globe. I hope the awardees will continue their important work in research, it is crucial in building an evidence-based approach to government in Wales.

‘It is in learning about the lived experience of women that we can share good practice, shine a light on areas where inequality persists and needs to be challenged and contribute to making a difference in the lives of women and girls.’

Jane Hutt MS, who congratulated all three awardees at the Wales Assembly of Women mini conference and AGM held over Zoom on November 28th 2020, said she was determined to bring evidence-based research to the forefront of Welsh Government’s work.

Audrey Jones, who represented Wales on the Economic and Social Council of the United Nations and contributed to UN consultations and debates on women’s rights across the world, died in 2015 aged 84. Up until she retired in 1990, she was deputy head of St Cyres Comprehensive school in Penarth, where she had taught since 1960.

Co-ordinator of the Audrey Jones Memorial Awards Dr Jane Salisbury said:
'Audrey was always very concerned that too much academic work remained on a library shelf or was only disseminated within a faculty or research group. All three of the presentations we received from our awardees were excellent and were something I know Audrey would have enjoyed listening to.'

The 2020 Audrey Jones Memorial Awards were presented to Dr Hannah Scott who looked at social identity in women diagnosed with early-stage dementia; Leah Hibbs who looked at female representation in local government and Philippa Davies who examined gender inequality in Welsh sport leadership.
​
Wales Assembly of Women is an independent campaigning NGO accredited to the United Nations Economic and Social Council. Its representatives have attended every major UN world conference for women since 1985.
It campaigns for women's rights in Wales and the World. Membership is open to all women in Wales and to women with connections to Wales. It is funded by the membership and charity grants and receives no public money.
​
WAW Membership form